We are funded by advertising, without subscription fees, and we want to keep it that way so everyone can share our passion. Please consider donating today.

The original Boeing 787 Dreamliner provided the backdrop to the first-ever Seattle-American Air Forum January 15, 2109 at the Museum of Flight.

SEATTLE – There was no Chinese representative at the first-ever Seattle-American Air Forum Tuesday, still the country’s presence loomed large.

Market giants Boeing and Airbus met Tuesday with suppliers to gaze into 10 years into the future.

The forum was convened as trade uncertainty roils global supply chains. In an industry such as aviation – where suppliers and customers can be anywhere in the world – any time there’s a twitch in international trade rules, people get nervous.

Protectionist leanings in the United States are leading to “unprecedented” tariffs – particularly directed at China – being imposed on imports of essential raw materials.

The forum operated under Chatham House Rules, meaning comments can be reported, but not who participated, or who made the comments. The format is meant to foster more open discussions. 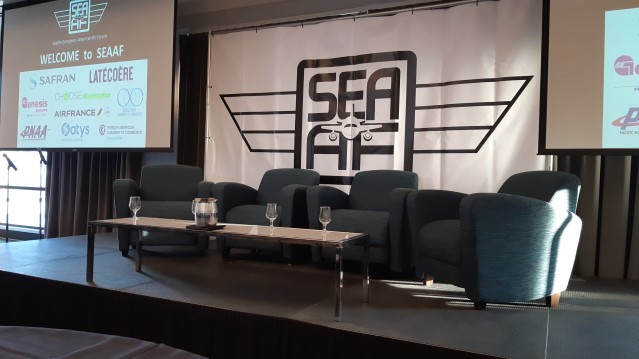 With more than one billion citizens and a growing appetite for travel, China represents a huge opportunity, and challenge, for airplane manufacturers. Already, estimates suggest China is respo aisle for a quarter of airplane manufacturing, particularly in aircraft components.

But there is no global builder of aircraft based in China – yet. Expect that to change in the next 10 years. Comac – a state-backed Chinese airplane maker – expects to produce thousands of aircraft, mostly to satisfy the domestic market.

With as many as 500,000 people working for Comac’s various branches and affiliates, “It’s just a matter of time,” said one participant.

“When you account for one-quarter of global demand, it’s legitimate to want to build airplanes.”

“The issue,” said another, “is whether the United States and the West can continue to compete with a state-driven economy that is half and half (private sector and public).”

“We’ve never had this kind of push-pull relationship with another country,” he said, comparing today’s economy to what existed during the Cold War. For 50 years, the U.S. confronted the Soviet Union militarily, but had no trade. At the same time, Japan was an economic rival, but posed no military threat. China has emerged a combination of the most challenging aspects of the two.

The key, agreed forum participants, is to approached China with your eyes wide open, knowing you could be partners today, and competitors tomorrow.

“We have too much going with each other to let the military run the show.”

China was not the only concern on participants’ minds.

Continuing uncertainty surrounding British plans to withdraw from Europe – known as Brexit – have also cast a pall on an otherwise healthy sector of the economy.

For example, no one could say what would happen to aircraft parts made in the UK – Rolls-royce is a leading global engine-maker – once the country leaves the European Union. Currently British manufacturers are subject to European Aviation Safety Agency regulates. No one could say who would approve parts and procedures after Brexit, nor how trade would work.

“If you’re Airbus, are you in a strange world where you have to bear the tariff of bringing engines into France?”

We are funded by advertising, without subscription fees, and we want to keep it that way so everyone can share our passion. Please consider donating today.